The trial for Abu-Jamal v. Kane happened on the same day that news of Mumia Abu-Jamal’s health crisis reached his supporters. This post provides a summary of both events, and includes links for further updates on efforts to defend Mumia’s life.

On March 30th, a trial was held in the federal court for the Middle District of Pennsylvania in the cases of Abu-Jamal v. Kane and Prison Legal News v. Kane, two lawsuits challenging the Silencing Act. The Pennsylvania General Assembly passed the Silencing Act, also known as 18 P.S. § 11.1304, last October. The law allows the Attorney General, county District Attorneys, and victims of personal injury crimes to bring lawsuits in civil court against “offenders” of a personal injury crime, in order to enjoin conduct that “perpetuates the continuing effect of the crime on the victim.” Actions that could prompt a lawsuit include “conduct which causes a temporary or permanent state of mental anguish.”

The law was passed in response to Mumia Abu-Jamal’s delivery of a pre-recorded commencement speech for students at Goddard College. Leading up to and in the wake of this speech, the Fraternal Order of Police, Governor Corbett, Department of Corrections Secretary John Wetzel, Philadelphia District Attorney Seth Williams, and a number of legislators staged a media campaign designed to whip up a frenzy of support for depriving Abu-Jamal, and any other “offender,” of their constitutional right to free speech.

Two weeks after the bill was signed into law by former Governor Corbett, Abolitionist Law Center and co-counsel filed a lawsuit on behalf of Mumia Abu-Jamal, Prison Radio, the Human Rights Coalition, Robert Holbrook, Kerry Marshall, Donnell Palmer, Anthony Chance, and Educators for Mumia Abu-Jamal. The lawsuit is seeking a declaration that the statute is unconstitutional and an injunction against its use by the Attorney General and the District Attorney for Philadelphia.

Plaintiffs in Abu-Jamal v. Kane filed a motion for preliminary injunction on the same day the ACLU of Pennsylvania filed Prison Legal News v. Kane, which was also seeking to overturn the law. Both cases were before Chief Judge Conner in late February for a hearing on defendants’ motion to dismiss. Judge Conner dismissed the claims against District Attorney Seth Williams from both lawsuits in a ruling on March 7th based on his explicit disavowal of enforcement, a promise to not bring a lawsuit under the Act, until there is a determination of its constitutionality. The District Attorney was a prominent supporter of the law prior to its passage by the Pennsylvania General Assembly. The judge also ruled that the Plaintiffs in the two cases could proceed to trial on the claims against the Attorney General, and the trial was scheduled for March 30th. 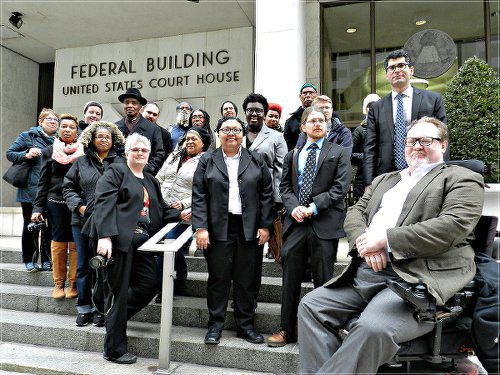 The trial on March 30th, approximately 5 months after Corbett signed this ill-fated bill into law, was “on the merits,” meaning that the judge will be making a final ruling on the constitutionality of the Act. Following the hearing, attorneys for the plaintiffs felt good about their chances for success. “Many court challenges on First Amendment grounds hinge on one basis for finding a law unconstitutional,” said ALC Legal Director Bret Grote. “However, the Silencing Act is plainly a violation of the First Amendment for several reasons, and we think we presented those reasons to the judge well.” We are hopeful that Chief Judge Conner’s ruling will be handed down in the next couple of months.

Almost immediately after conclusion of the trial, the positive atmosphere amongst the legal team and supporters was interrupted by the news that Mumia Abu-Jamal had lost consciousness and had been moved from SCI Mahanoy for emergency care at the nearby Schuylkill Medical Center. His blood sugar count was at 779: he was in diabetic shock. His sodium level was 160. Since January, Mumia has been suffering from a severe case of eczema that was reportedly treated with antibiotics and steroids, which caused an allergic reaction. His life threatening medical crisis continues and has now been labeled late-onset diabetes, which should have been identified and treated far earlier than it was.

Mumia’s supporters and family members, together with ALC attorneys, rushed to the hospital to intervene on his behalf, but were prevented from speaking with him and were denied any information about his condition for more than 24hrs. The prison did not notify Mumia’s attorneys or family members of his health emergency, and if not for the fact that supporters were at the prison that morning to visit with him, a visit that was denied because he’d been sent to the hospital, it would likely have been days before news of his condition reached his loved ones. The situation bears echos of the recent passing of political prisoner Phil Africa of the MOVE organization, whose condition was not shared with his relatives until the day before his death, the cause of which remains unknown.

Prison Radio is raising funds to pay for outside doctors to meet and consult with Mumia about his illness and treatment, in order to ensure that his life is not threatened again by the extreme lack of competence among medical staff within the Pennsylvania Department of Corrections (PADOC). We encourage everyone to please donate to the Indiegogo campaign, and to share it far and wide:

You can DONATE at this link.

Mumia’s supporters are also organizing to push the PADOC to allow outside medical care for Mumia, and are circulating a petition. Their most recent update makes clear that he is suffering and still at risk:

His blood sugar registered in the mid 200s today and continues to fluctuate, and although Mumia is still very weak, he was better than on Friday. He told us that the doctors gave him a double shot of insulin right before he came out for the visit, likely in an effort to make him appear temporarily more energetic than he is. This concerns us because insulin overdose is a possibility in these instances. Again Mumia has not yet been seen by a diabetes specialist, although the general practitioner told him today that perhaps he needs to see a nutritionist. This is a sign that our muckraking is working, since the news has gotten around that he was given spaghetti for lunch when his blood sugar registered at 336.

However, despite this modest progress Mumia  struggled to get out of his wheelchair so that we could take a photo of him. He remained in the wheelchair for the rest of the visit.

More updates can be found HERE and HERE.