September 2, 2014: Pittsburgh, PA – Abolitionist Law Center and the Human Rights Coalition have released a report entitled, No Escape: Exposure to Toxic Coal Waste at State Correctional Institution Fayette, based on a year-long investigation into the health impacts of exposure to coal waste at the state prison in Fayette County, PA. The report reveals alarming rates of illnesses consistent with exposure to coal ash, a toxic byproduct of burning coal in power plants. 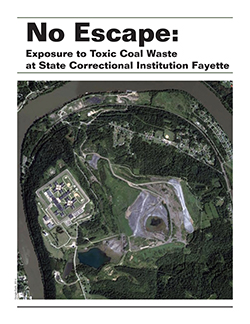 Surrounded by “about 40 million tons of waste, two coal slurry ponds, and millions of cubic yards of coal combustion waste,” SCI Fayette is inescapably situated in the midst of a massive toxic waste dump. The prison was built on part of a Coal Refuse Deposit Area owned by Matt Canestrale Contracting, which currently operates a coal ash dump directly adjacent to the prison. Before Matt Canestrale Contracting took it over, the land was a dumping ground for coal waste from one of the world’s largest coal processing plants.

The investigation was launched in August of 2013 by Abolitionist Law Center (ALC), the Human Rights Coalition, and The Center for Coalfield Justice, after receiving reports of high rates of illnesses at SCI Fayette. Prisoners reported a number of overlapping symptoms and diseases, including chronic sore throats, extreme throat swelling, shortness of breath, headaches, dizziness, vision problems, stomach pain, and sores, cysts, and tumors in their mouths, noses, and throats, as well as on their skin. Many prisoners reported being diagnosed with thyroid disorders or cancer after arriving at SCI Fayette. Residents of the nearby town of LaBelle, PA have also reported high rates of breathing problems and cancer, and have been calling for the coal ash dump to be shut down.

“No Escape” represents the preliminary findings of the investigation, and more research is needed to better understand both the risks posed by the dump and the nature of prisoners’ health problems. Nonetheless, these preliminary findings raise legal questions about the location of the prison. According to the report, “Situating a prison in the midst of a massive toxic coal waste dump may be impermissible under the Constitution if it is shown that prisoners face a substantial risk of serious harm caused by exposure to pollutants from the dump.” ALC attorney Dustin McDaniel put it this way, “If the patterns of illnesses we’re seeing at SCI-Fayette are indeed related to pollution from the dump, then this prison should be shut down.”