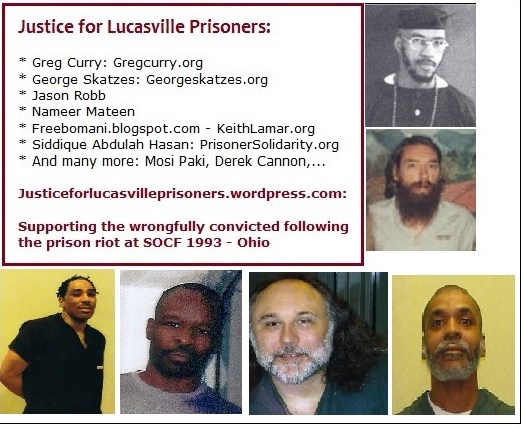 Journalists, a professor, and a group of prisoners brought a civil rights lawsuit against Ohio Department of Rehabilitation and Correction (ODRC) officials on Monday, December 9, asserting that prison officials violated the First Amendment of the U.S. Constitution in restricting media access to prisoners convicted of crimes related to the 1993 Lucasville prison uprising in order to stifle public discussion.

“The First Amendment guarantees to all people the right of free speech; this right cannot be extinguished at prison walls,” said Noelle Hanrahan of Prison Radio, lead plaintiff in the lawsuit. “Prisoners have a right to speak.  The public has the right to know.   Suppressing the freedom of speech of prisoners has only one purpose: to keep the truth from being reported.”

1)    Prison officials are denying media requests based on the anticipated content of the interviews in violation of the First and Fourteenth Amendment;

2)    Prison officials do not have a rational basis for denying media interviews with prisoners convicted of crimes stemming from the 1993 Lucasville prison uprising in violation of the due process and equal protection clauses of the Fourteenth Amendment;

All five prisoner-plaintiffs were framed for homicides that occurred during the 1993 Lucasville prison uprising. The uprising lasted 11 days. Nine prisoners and one prison guard were killed during the uprising.

Siddique Abdullah Hasan, Keith Lamar (aka Bomani Shakur), Jason Robb, and George Skatzes are four of the prisoner-plaintiffs who are part of a group collectively referred to as the Lucasville 5-plus. These men were framed and sentenced to death for homicides that occurred during the 1993 Lucasville uprising, and have been held in solitary confinement for the last 20 years, fighting Ohio’s ongoing efforts to execute them. The “plus” refers to the numerous other prisoners framed up in the aftermath of the uprising who received sentences other than death.

A fifth prisoner-plaintiff, Gregory Curry, is serving a life sentence after being convicted for a homicide occurring during the riot in a trial fraught with perjured testimony, suppressed evidence, and prosecutorial misconduct.

As the state persists in its efforts to execute the Lucasville 5, the fight over historical truth continues as well, with lives hanging in the balance. Access to media in this context involves more than the protection of an abstract right, but instead implicates the most fundamental questions about the humanity of people in prison and the tyranny of the state.

The lawsuit claims “Defendants and their predecessors have for twenty years denied all face-to-face media access to prisoners convicted of crimes committed during the April 1993 uprising[.]” In addition to denying requests by Hanrahan, Ridgeway, Jones, and Hedges for interviews with prisoners convicted of crimes related to the uprising, reporters from the Columbus Dispatch, the San Francisco Bay View, and the Associated Press in Columbus have been denied access to those prisoners as well.

In contrast, prisoners convicted of crimes that are unrelated to the 1993 uprising have been permitted to speak with journalists and media workers from WTVG 13 (ABC Toledo), The New York Times, Fox 25 News in Lima, Ohio, French national TV channel France 2, the Edinburgh Evening News, BBC News, Channel 35 in Lima, Ohio, Towers Productions in Chicago, News of the World of Glasgow, Sunday Post of Glasgow, The Times of London, Cicada Films, and WJW-TV in Cleveland, Ohio.

The lawsuit is the latest effort by supporters of the Lucasville 5-plus to challenge the state of Ohio’s efforts to control the factual narrative and the political meaning of the Lucasville uprising. Staughton Lynd, a lifelong political activist, author of several books (including Lucasville: The Untold Story of a Prison Uprising), and attorney has stated, “the truth about these events remains untold in the courts as well as in the media.”

ALC will continue to follow this case and support efforts for the Lucasville 5-plus.