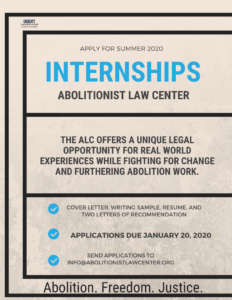 Legal Internships with the Abolitionist Law Center: We are now accepting internship applications.

The Abolitionist Law Center is offering legal internships to law students who successfully complete their first year and  want to work with us in defending the human rights of prisoners in Pennsylvania. Our casework includes litigation challenging solitary confinement and prison censorship, exposure to toxic coal waste at SCI Fayette, juvenile life without parole, and other projects we are involved in or developing. To learn more about the ALC and our commitment to building a movement to abolish race and class based mass incarceration visit our website: https://abolitionistlawcenter.org/.

Applicants are required to submit the following:

Resume: no longer than one page in length to reflect most recent work history. Previous internships and volunteer experience may also be included.

Letters of Recommendation: Two letters of recommendation from professors, employers, or professionals: These should be from people who can attest to your ability to handle challenging intellectual work, learn new material, work well in a collaborative setting, and communicate effectively.

Legal writing sample: no longer than 5 single-spaced pages or 10 double-spaced. This can be an excerpt from a longer writing.

Decisions: Decisions will be made on a rolling basis. We currently anticipate a limit of 3-4 interns for the summer program. There is no funding available from the ALC for these positions; students will be required to finance their internship via grants, fellowships, or other means.

Applications should be emailed to: info@abolitionistlawcenter.org

Incomplete applications may not be accepted.

Due Date:  January 20th is the deadline for summer applications.

Posted on January 8, 2015 by abolitionist

January 8, 2015 – A motion for a preliminary injunction was filed today in the ongoing lawsuit, Abu-Jamal v. Kane, challenging a Pennsylvania censorship law intended to silence Mumia Abu-Jamal and others convicted of personal injury crimes.

The Silencing Act, also known as 18 P.S. § 11.1304, allows the Attorney General, county District Attorneys, and victims of personal injury crimes to bring a lawsuit in civil court against the person convicted of the personal injury crime to enjoin conduct that “perpetuates the continuing effect of the crime on the victim”. The actions that could prompt a lawsuit include “conduct which causes a temporary or permanent state of mental anguish.”

“This law is unconstitutional,” said David Shapiro of MacArthur Justice Center. “The facts are on our side and the law is on our side. The ‘Silencing Act’ targets a huge amount of constitutionally protected speech based on who is speaking.”

After a prerecorded commencement speech by journalist and prisoner Mumia Abu-Jamal was played for graduates at Goddard College in Vermont, the Pennsylvania legislature passed and outgoing Governor Corbett signed into law the “Silencing Act” on October 21st, 16 days after the commencement speech.

Abu-Jamal has spent 33 years in prison, 29 of which were in solitary confinement on death row after being convicted at a 1982 trial that Amnesty International said “failed to meet minimum international standards safeguarding the fairness of legal proceedings.”

Robert L. Holbrook, who is serving a death by incarceration (life without parole) sentence he received as a child, had this to say about the law: “there are people in prison who will stop writing, stop publishing, stop speaking out because of this law.”

“Silencing prisoners is one more way of dehumanizing them,” said Amistad Law Project Policy Director Nikki Grant. “We need the voices of the marginalized to shed light on injustice.”

Plaintiffs’ Brief in Support of Motion for Preliminary Injunction in Jamal v. Kane