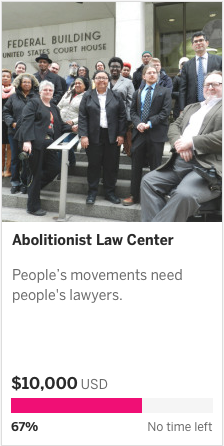 Thank you all for supporting Abolitionist Law Center and helping to get the word out about our work! With your help we were able to raise exactly $10,000, which is nearly double what we raised from crowdfunding last year. More than 6 times as many tweets were sent out about this campaign, and nearly twice as many Facebook posts. This growing support will embolden us to push even harder against race and class based mass incarceration.

With your support we are now able to keep working through the rest of 2015, and we are in a great position to grow. We’ll keep you updated via email announcements about our projects as the year progresses. Expect announcements about our solitary confinement docket, and our investigation and advocacy related to coal ash pollution at SCI Fayette.
Finally, we’d like to bring to your attention a couple other important causes that we support, and which could benefit from your interest and support:

1) The Prison Ecology Project was recently organized by our friends at the Human Rights Defense Center. The project is aimed at creating tools to dismantle toxic prisons, andwas in part inspired by ALC’s work exposing the link between coal ash pollution and prisoner health problems at SCI Fayette.

They recently filed a comment letter with the EPA, which ALC and 92 other organizations signed-on to. The letter challenges the EPA to consider prisoners as Environmental Justice Communities, which would entail more scrutiny of environmental conditions and permitting that affects prisoners. Currently, the EPA does not consider the wellbeing of prisoners at all, yet thousands of them are being forcibly held in environmentally toxic conditions. So keep an eye out for this project, and support it where you can: https://www.indiegogo.com/projects/prison-ecology-project#/story

2) Political prisoner Robert Seth Hayes is raising money to support his struggle to get proper medical care, and to win release from prison. After returning from the Vietnam War, Seth joined the Black Panther Party and was later imprisoned for his involvement in the struggle for Black Liberation. Seth was sentenced to 25 years to life, which means after serving 25 years he was eligible for parole. Seth has now been locked in prison for 42 years and unjustly denied parole on 10 occasions. Please take a look at his support campaign, and help out however you can.

We just launched an Indiegogo campaign to raise money so we can continue and expand our work supporting the movement to abolish mass incarceration. If you’ve made it to our website, then you probably have some idea of what we do, but for those who are new to the work of Abolitionist Law Center here is a brief summary:

We are movement lawyers engaged in litigation, education, and grassroots organizing for social justice, with a special focus on fighting against mass incarceration. As implied by our name, we aim to abolish mass incarceration, a system of social control that is rooted in this country’s long history of racial and class-based discrimination and oppression. As movement lawyers, we understand the limitations of fighting for the abolition of mass incarceration from within the institutions that have created it, so we work closely with the people most affected by mass incarceration (current prisoners, former prisoners, and the friends and family members of prisoners) in order to cultivate and strengthen a mass movement against the American penal system.

On the other hand, we recognize that the courts provide a forum for advancing the aims of the movement, and attorneys often times have more access to prisoners than others are allowed. Practical victories that can be won in court include gaining the release of political prisoners from decades of solitary confinement, or successfully defending the right of prisoners to express viewpoints that are critical of the criminal legal and prison systems. In both cases, victory means increasing the ability of prisoners to communicate with supporters and activists on the outside, who are then able to more effectively push for immediate action to be taken in cases of physical and mental abuse against prisoners, as well as pushing for long term structural changes. Additionally, each concrete victory has symbolic benefits that encourage and help to build the movement to abolish mass incarceration.

If you believe that mass incarceration needs to end, and recognize the unique role that movement lawyers can play in helping the broader movement bring about that end, then please consider supporting the Abolitionist Law Center by donating to our Indiegogo campaign. All donations are tax-deductible.

Check out these recent news articles about our investigation into environmental conditions at State Correctional Institution Fayette:

Vice.com – Coal Ash May Be Making Pennsylvania Inmates Sick, and Now They’re Fighting to Shut Their Prison Down

Public Source and The Allegheny Front – Two men. One coal-ash dump. No answers.