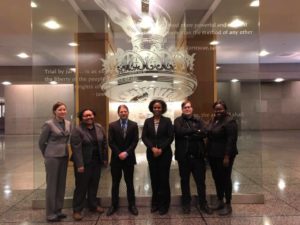 PHILADELPHIA – The United States District Court for the Eastern District of Pennsylvania has granted Darrick Hall’s preliminary injunction against the Pennsylvania Department of Corrections. Darrick has been held in solitary confinement on death row for the past 24 years. In spite of his death sentence being vacated in 2014 and overwhelming evidence of the devastating mental health consequences of solitary confinement, the DOC continued to hold him on death row in an open grill cage, subjected to humiliating strip searches and a dog leash he is tethered to every time he leaves his cell. In ruling that Darrick is entitled to an immediate review of his placement in solitary confinement, Judge J. Curtis Joyner wrote, “[i]ndeed, we are somewhat perplexed as to why Mr. Hall remains housed in the Capital Case Unit and why efforts have yet to be undertaken to transition him to General Population.” The Abolitionist Law Center, Amistad Law Project, and Roderick and Solange MacArthur Justice Center represented Mr. Hall in this matter.