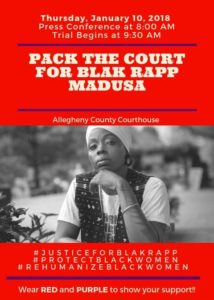 (Pittsburgh, Pennsylvania). Over the last couple of weeks, the national discourse has been on highlighting the realities that Black Women face. From #survivingrkelly to #jasminebarnes to #metoo,Black women have asked the community at large to stand up and protect Black women and that discourse is true right here in Allegheny County from #JadeMartin to the women incarcerated at the Allegheny County Jail.

But what happens when one protects or tries to defend Black women? Well, if you are Blak Rapp Madusa (Melanie Carter), you get violently taken to the ground and arrested for standing up for black girls. In a viral video,  Blak Rapp intervened on behalf of young Black teen girls who were being violently removed by a local officer. After hearing the girls being dehumanized and called “animals”, Blak Rapp tried to intervene on their behalf. Blak Rapp stood up for Black girls and is now fighting for their freedom. Blak Rapp was charged with disorderly conduct, resisting arrest, defiant trespassing and failure to disperse even though the manager was fired, and the district attorney admitted the incident “does raise concerns.” These charges are indicative of the barrier’s individuals face while trying to protect Black women and girls from violence and injustice. Blak Rapp is being represented by the Abolitionist Law Center.

On January 10 at 9:30 AM BLAK RAPP MADUSA will go on trial at the Allegheny County Court of Common Pleas with Judge Cashman presiding. Prior to the trial, a press conference is scheduled for 8:30 AM. Per Blak Rapp’s request (due to the violent threats they continue to receive), the press conference will not only include brief remarks about their case but also the plight of Black women and girls in Allegheny County. In highlighting the injustices facing Black Women and girls the press conference will include remarks from the following:

Kelli Shaker: Survivor of violence and Founder of FroGang an organization that seeks to inspire and encourage young black girls to love themselves and accomplish their goals.

Jade Martin: Mother and survivor of violence. She made headlines last year after being assaulted in a pizzeria.

Brandi Fisher: President of the Alliance for Police Accountability (APA) is dedicated to criminal justice reconstruction and putting an end to police brutality and racial profiling through advocacy, education, and policy.

Nicky Jo Dawson: Community organizer and founder of BLAQK OPS an organization that seeks to empower and educate the local community on their history and their rights.

Miracle Jones: Director of Communications for the Abolitionist Law Center a Pittsburg based legal nonprofit that works to end mass incarceration.

Additionally, supporters of Blak RAPP will be wearing purple and red to show support as they go on trial and will be using the hashtags #JusticeforBlakRAPP, #protectblackwomen, #rehumanizeBlackwomen to show their support.