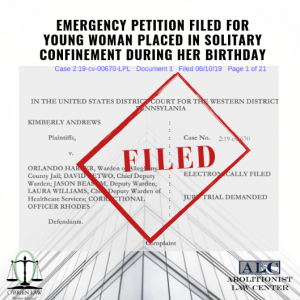 On Monday the Abolitionist Law Center along with the law office of Timothy P. O’Brien and attorney Jules Lobel, filed an emergency petition against the Allegheny County Jail (ACJ) in the United States District Court for the Western District of Pennsylvania to remove a young woman from solitary confinement housing after spending more than 70 days – including her birthday – in the restrictive housing unit at ACJ since February, resulting in severe mental health crises and three suicide attempts.

The ALC and co-counsel are representing Kimberly Andrews, a 20-year-old woman awaiting disposition on misdemeanor cases who has been in solitary confinement off and on since February of 2019, despite having known mental health issues. While at the ACJ, Ms. Andrews has tried to self-harm at least three times due to the decompensation associated with the placement in solitary confinement and harsh prison conditions within the restrictive housing unit. Ms. Andrews suffers from known mental health disorders including bipolar disorder, post-traumatic stress disorder, anxiety disorder, and oppositional defiance disorder. Instead of receiving access to treatment and waiting for the adjudications of her case, Ms. Andrews has undergone repeated dehumanizing encounters with abusive ACJ staff.

For instance, on one occasion Ms. Andrews spent at least 8 consecutive hours in the restraint chair, strapped in so tight that it caused bruising around her wrists and shoulder areas. She was again deprived food, water, bathroom breaks, or any ability to move her limbs. Staff returned at one point to loosen the strap on her right wrist, as it was cutting into her flesh. Ms. Andrews asked for her inhaler, but her request was denied; no other medical checks were conducted.

The treatment of Ms. Andrews highlights the inability of the ACJ to create policies and procedures to ensure the safety and security of those incarcerated with medically diagnosed disorders. Ms. Andrews has been able to successfully interact in general population and was able to have a job when briefly removed from solitary confinement. Despite previous attempts to resolve this situation, Ms. Andrews remains in solitary confinement where she continues to struggle to acclimate based on her health history and continues to self-harm as a result.

She has been kept in solitary confinement for over 70 days by Defendants at the jail, although she has not been either charged with or convicted of any violent conduct by officials at the jail. She has a history of mental illness, which is greatly exacerbated by her placement and retention in isolation. She has attempted suicide three times since being placed in solitary confinement.

The petition is asking the court to grant Ms. Andrews as temporary restraining order which would prevent her from being placed in solitary confinement as well as prevent specific ACJ staff from contacting her due to their denial of medical treatment and triggering conduct. The ACJ spent more than $200,000 on bedding, replacing sheets with anti-suicide blankets due to the number of suicide and suicide attempts in the facility.

Brief in Support of TRO-as Filed