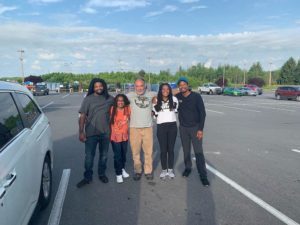 The Abolitionist Law Center and the People’s Law Office are proud to share that Janet Holloway Africa and Janine Phillips Africa of the MOVE 9 have been released from state custody after more than forty years of incarceration. Earlier this morning, the MOVE sisters were finally released on parole from SCI Cambridge Springs and are now with family and friends. The sisters have been battling for their freedom after being consistently denied parole for a decade despite an impeccable disciplinary record and extensive record of mentorship and community service during their time in prison.

Following their 2018 parole denial, attorneys from Abolitionist Law Center and People’s Law Office filed petitions for habeas corpus seeking their release from prison. The habeas petitions challenged their parole denials on the grounds that the decisions were arbitrary and lacking in any evidence that janet or Janine presented a risk to public safety. Under pressure from litigation and with a court date for May 28 looming, the Pennsylvania Board of Probation and Parole (board) granted Janet and Janine parole on May 14, 2019, just one day after the anniversary of the notorious May 13, 1985 bombing of the MOVE home.

“The release of Janet and Janine is a victory not only for them and their loved ones, but also for the MOVE Organization and the movement to free all political prisoners,” said attorney Brad Thomson of People’s Law Office. “Janet and Janine were excellent candidates for parole. They have been described by DOC staff as model prisoners and neither of them has had a single disciplinary incident in over twenty years. While in prison, they have participated in community fundraisers, and social programs, including training service dogs. They are remarkable women to deserve to be free.”

Like Debbie and Mike Africa, who were released last year, Janet and Janine are now able to experience holding their loved ones outside of prison walls for the first time in decades. The release of Janet and Janine after forty years is the culmination of the MOVE organization, public support, legal action, and policy changes.

Three other members of the MOVE 9 remain incarcerated (Chuck, Delbert and Eddie Africa), while two others (Merle Africa and Phil Africa) died in custody. Abolitionist Law Center and People’s Law Office represent Chuck, Delbert and Eddie in the struggle for their freedom. To support the fight, you may donate to the MOVE9 Legal Fund.